Native Restoration has begun the first stage of the Buckthorn Eradication project between the two ponds (referred to as Area 2 in the aerial map from the October board meeting) and then will proceed to Area 3, the area between Ashford Drive and Windmere Court. As a reminder, these areas were chosen first due to the atheistic appeal it could bring, as well as the safety implications especially for areas 2 and 3. The safety implications are noted due to the lack of illumination at night due to the over growth of buckthorn blocking illumination from street lights and homes.

The first stage of this project is clearing. Clearing a site of all invasive trees and shrubs is almost always the first step to restoring a site. Sites that have not been managed over the years will always have woody invasive growth, most commonly buckthorn and honeysuckle, shading out the herbaceous layer. These species both block out sunlight, which does not allow any other plants or trees to grow, as well as become so dense that it renders the area unusable. 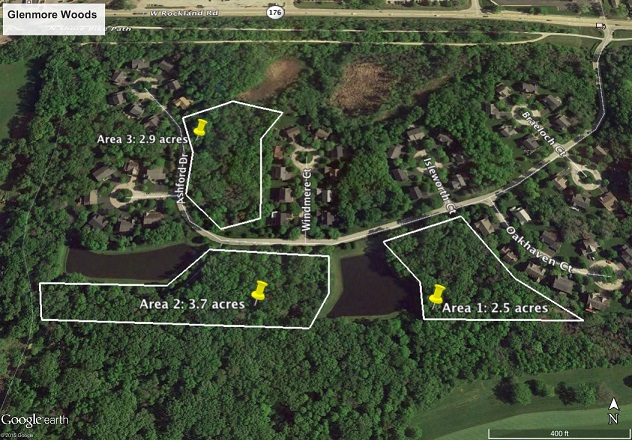 There are a few different methods to clearing a site of unwanted trees and shrubs. One of these is using a forestry mower. Although this method may seem economical up front, we believe that the long-term damage this method does to a site is significant. A forestry mower demolishes all trees and shrubs in its path. Shattered stumps are covered up by wood shards, making it nearly impossible to herbicide stumps, which is crucial to ensure that trees do not resprout. All debris is left on site which creates a thick layer of debris, forming a barrier blocking sunlight from hitting the soil and causing subsequent controlled burns to burn excessively hot. All of these actions are counterproductive to the restoration process. It is Native Restoration Services’ (NRS) opinion that all clearing should be done mechanically with chainsaws and brush saws and that each stump should be treated with an appropriate herbicide, effectively killing it. Following cutting, debris will be burned on site, in brush piles. Clearing in this manner will effectively control and get rid of unwanted trees and shrubs while minimally impacting the site itself.