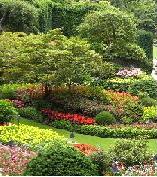 At the 2010 Annual General Meeting on April 6th, 2010, the Glenmore Woods Landscape Committee was informed that there was budget in 2010 to look at the prioritization of problems areas in Glenmore Woods. . The Landscape Committee is chaired by Frank Keres with current members consisting of Christine Hides, John Lucas, Tim Cummins and Joe Sturonas. The committee is looking for three other homeowners to join. The next meeting will be Saturday, May 8, 2010 at 9:00am located at at 28628 Isleworth Ct.

The goal of the committee is to identify landscape issues in Glenmore Woods as it relates to safety, preservation and aesthetics. The three additional members would preferably be from preferably from Cul-de-sac’s not currently represented, such as Oakhaven Ct., Scarborough or Ashford Dr. If you are interested, please go to the "Contact Us" page and post a message to any board member.